How to get started in mobile journalism Credit: Image by Sheff on Shutterstock.

This is an updated version of a piece initially published in April 2015.

"Mojo was my Everest but now it's my best friend."

RTÉ News journalist Patricia O'Callaghan talked through her journey from online journalism to mojo reporter at the Mobile Journalism Conference (MoJoCon) in Dublin in March 2015.

"I find it to be a really valuable skill. It has opened up so many opportunities for me and I can't imagine life in the newsroom without it now."

O'Callaghan uses her smartphone to film visually strong, feature stories, and said mojo has made her "self-sufficient".

She films context-setting general views (GVs), interviews and pieces to camera with her mobile kit, and also uses her phone to edit packages, particularly reports that will be published online.

At this year's MoJoCon in Dublin in April, delegates found out how mobile journalism has grown in popularity in newsrooms across the world, from a mobile newsroom in the United States, to a project at Germany's Spiegel Online, and to Independent Media South Africa.

But the mobile journalism landscape has changed slightly since last year, not only due to the development of new apps (and more Android apps), but also because of the advent of livestreaming within social networks.

Periscope and Facebook Live could become, for many journalists, the gateway to mobile journalism, as those who want to livestream to Facebook generally have to do so from within the app – although workarounds are available for professionals.

To help those who want to get started with mobile journalism and livestreaming, Journalism.co.uk has compiled a list of basic tips to help you start on the right foot and make the most of the camera you already have in your pocket.

Mobile video expert and former BBC video journalist Mark Egan covered the basic checks you need to make before tapping 'record' on your phone, speaking at a MoJoCon workshop in 2015.

Start by putting your phone in airplane mode – this stops calls and app notifications coming through and interfering with your reporting, particularly if you're livestreaming.

Clean your lens. It's not necessarily something smartphone users tend to do very often, but even a small speck of dust on your lens can compromise your shot.

Hold your phone horizontally so your phone's home button is on the right hand-side. This prevents you from accidentally shooting upside down, which while a correctable error, it does mean you will have to spend additional time fixing it with editing software. And always film horizontally unless you're using an app that makes it impossible to do so, or filming specifically for an app designed for vertical video such as Snapchat.

"Take a second each time to lock focus and exposure," advised Egan, adding that shifting focus mid-shot – which your phone is likely to do automatically – means your shot will look "a bit unsettled".

Finally, make sure your shot is stable. If there's no tripod on hand, here's a way to hold your phone that will help:

Before you start a live stream

Facebook Live is a great opportunity to reach a large number of people who would not otherwise interact with your news organisation.

Facebook offers prime real estate in the news feed for live video, prompting publishers to incorporate livestreaming into their social video strategy and encourage their reporters to do more and more lives.

But before you start livestreaming, there are certain considerations that journalists need to be aware of, especially in breaking news situations. As with any live video, once it's out there you can't take it back, so journalists need to be prepared for every scenario that might happen in front of their lens.

At this year's MoJoCon, social media expert Sue Llewellyn outlined "the spectre of livestreaming", or 7 key considerations for journalists about to start livestreaming. Remember these before you go live next time.

BBC smartphone trainer Marc Settle advised mojo beginners to check which microphone on their device actually records the audio, as it may be a different one when filming or taking calls.

If you're holding the phone in your hands during filming, make sure your hands aren't blocking the microphone.

If you're recording in a loud environment and have no external microphone, reach for a pair of standard headphones – they usually come with a microphone that can make a huge difference.

And if you're using an external microphone, plug it in before launching any apps to make sure it's detected and used, said Egan.

He also advised mojo reporters to get close to their subject when filming, as this will not only give you "a look that you can't often get with a big camera", but will also result in better audio if using the phone's internal microphone.

Film a variety of shots and different angles, advised O'Callaghan.

"You can also never have enough close-ups," she said. "And [you should] film in sequences, which really help you to tell the story."

"Use the special touches that apps allow, such as timelapses or other features that will make your report look really special."

Journalism.co.uk caught up with Patricia O'Callaghan after her talk.

Being aware of the limitations to working with your phone is also important, she said, such as filming in the darkness, which "doesn't do very well".

"When it comes to recording interviews," she said, "watch them back there and then on location.

"Listen back to them while your interviewee is still standing in front of the camera and still might talk.

"Check the audio and just check to make sure that the interview shot looks ok."

RTÉ News video and mobile journalist Philip Bromwell gave the same advice in a workshop last year, no matter how you choose to record the audio – whether using an external or internal microphone.

"Before you leave just check that you've got usable audio because accidents do happen," he said.

Check out these mistakes mobile journalists have made while filming, and how they fixed them.

There are countless options out there for what to include in your mobile journalism bag, and Bromwell said the most expensive part of an RTÉ journalist's mojo kit is the phone.

A good way to find out what's out there and what works for you is to peer into other journalists' mojo bags when they share information and trade tips on social media.

The contents of my MoJo kit #mojocon pic.twitter.com/wOa8MX84jj

For those on a budget, photojournalist and lecturer Martin Shakeshaft put together a "student mojo kit" that costs just under £100 altogether.

Options are equally varied when it comes to mobile journalism apps. Some of the iOS staples are Filmic Pro for shooting and iMovie for editing.

If you're using an Android device, try Camera FV-5 for filming and Kinemaster for editing. The offering for Android has expanded over the past twelve months, so you will not necessarily have to buy an iPhone for mojo if your budget does not allow that. 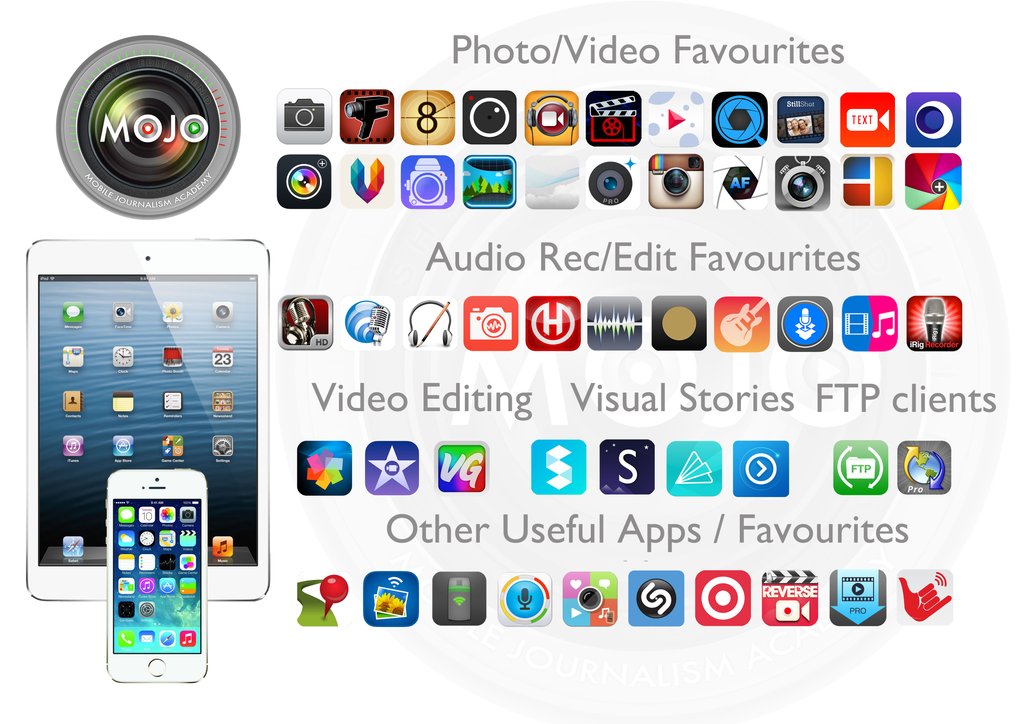 "Download the apps that you think will work for you, experiment, and enjoy it," concluded O'Callaghan.

"Your smartphone is a really valuable resource, make the most of it."

Check out Journalism.co.uk's #mojomonday series of stories about mobile journalism.

Are you an experienced mobile journalist or have you recently started reporting using your phone? Let us know what tips, apps or general advice has helped you along the way by tweeting us @journalismnews.