How 7News hopes to livestream video to reach new audiences 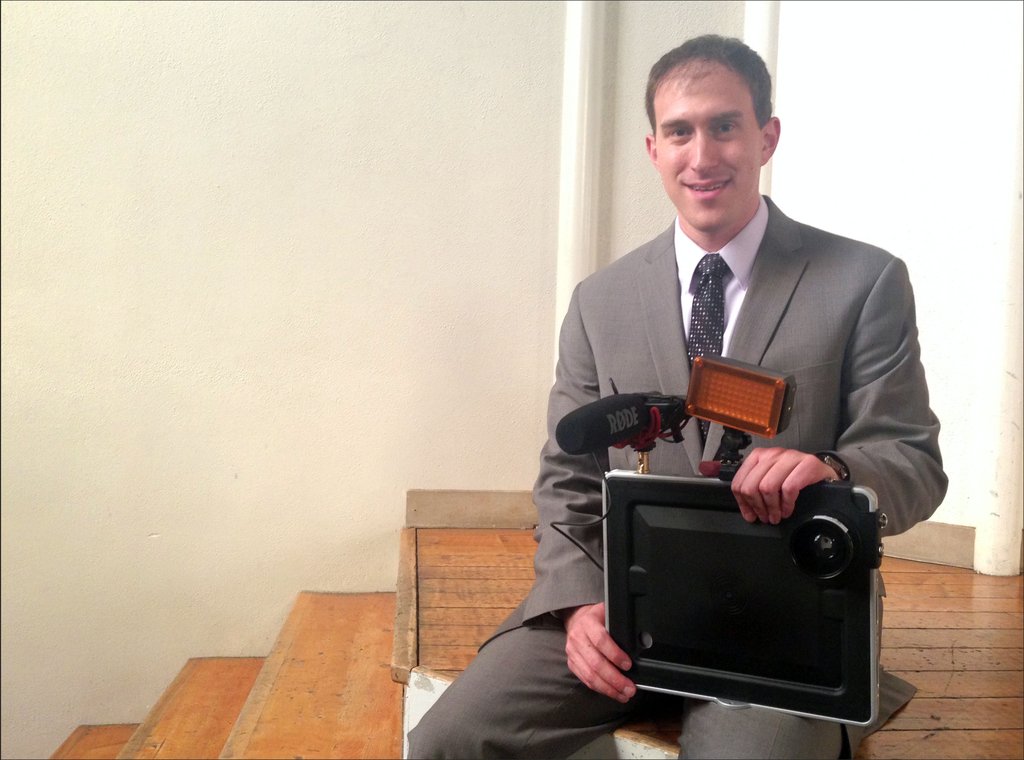 If the interactive image does not appear, click here.

It might not fit well into a backpack, but the above piece of equipment is revolutionising how Denver-based station 7News is producing video for both television and the internet.

Phil Tenser, digital executive producer at 7News and its related channels KMGH and TheDenverChannel.com, brought the Padcaster to the recent Society of Professional Journalists (SPJ) Region 9 Conference in Denver.

"We can use them to stream live and produce and edit video packages for television and for the internet without having to lug the standard camera and tripod," Tenser told Journalism.co.uk of his setup, which includes extra lenses, a light and a dedicated microphone.

"This is a lighter kit and it's also much more functional than a singular camera that you have to bring a laptop and edit with as well."

We've recreated a television studio out of spare parts for the internetPhil Tenser, 7News

The result is a piece of kit that can livestream high-definition video from any location with Wi-Fi available for a relatively cheap outlay – around $1,000 (£658) according to Tenser.

At the time of publishing, 7News had not yet produced video for broadcast using the Padcaster, purchased around a week ago, aside from testing it on Facebook.

However, the equipment may be used in a "live video edition" 7News is launching today, April 27, covering the trial of James Eagan Holmes, the man accused of 2012 Aurora cinema shooting which left 12 people dead and 70 more wounded.

"It's a dark subject, and we have to be very careful and compassionate in how we cover it," said Tenser, "but... I think everyone in Colorado has been affected in some way by this, and everyone deserves to have access to see the process of justice."

7News will be livestreaming from the courtroom as much as possible, including opening statements and testimonies.

In a story explaining how the coverage will work, Tenser explained that the outlet's fixed-position camera will be "the only recording and transmitting device permitted inside the courtroom", which has never before allowed "expanded media coverage" of a trial.

Back at the 7News office, the news team has spent the last few weeks assembling "a television studio out of spare parts for the internet" to manage the livestreaming process, he told Journalism.co.uk. The livestreaming studio at 7News in Denver. Credit: 7News

Video from the trial will be livestreamed to YouTube and the 7News site, with clips shared to other platforms including the outlet's other social media channels and a live blog, where appropriate. The Padcaster, while not used to livestream from the courtroom, may be used to produce footage for social media.

Experimentation and innovation is essential for news outlets to survive and reach new audiences in the digital age, Tenser added, noting that "the internet has already gone 'Pacman'" in the way it has effectively consumed a role previously carried out by newspapers.

"Now [with online broadcasts] we have to figure out how to do what television used to do," he said.

7News currently has more than 8,000 subscribers to its Denver YouTube channel, while videos posted to Facebook can reach views of up to five or six figures, Tenser said.

Noting Facebook's increased emphasis on native video, he also said journalists should be "prepared for silent autoplay" by producing "something the viewer can comprehend and 'get' without having to hear the narrative".

Similarly, with people increasingly viewing video on mobile, visuals should be "simple enough for a two-inch wide screen".

"You've got to be up close and personal, especially at the start," he said.

Check out more apps and equipment for mobile journalists

As part of Journalism.co.uk's news:rewired digital journalism conference in July, MoJo expert Robb Montgomery will be going into detail on some tools and best practices for mobile journalism, find out more about the day here
Tags: Click tag to find related articles; click icon for feed